Google on Thursday celebrates CV Raman's 125th birthday by dedicating a doodle on its homepage.
Born on November 7, 1888, in Trichinopoly, Madras Province, Sir Chandrasekhara Venkata Raman was a renowned physicist whose made significant contributions to the growth of science.
His interest in physics developed from early years of his life. Pursuing his passion, CV Raman won the gold medal in physics in 1904 and passed his BA examination securing first place. He completed his MA in 1907 with distinctions.
CV Raman had researched at IACS after joining the Indian Financial Service as an assistant auditor general for the government of India in 1907.
CV Raman is known for his work on the scattering of light and for the discovery of the Raman Effect.
His discovery won him the Nobel Prize in 1930, thus making him the first Asian and first non-White to receive any Nobel Prize in the sciences.
To pay tribute to this unique mind, the nation observes National Science Day on February 28. The science day is observed every year to commemorate Dr CV Raman's find of Raman Effect, the inelastic scattering of a photon.
Google today remembers CV Raman on his 125th birthday by dedicating a doodle that showcases his portrait along with light rays emitting from a source.
The doodle is available only on Google India pages. It also appears on the homepage of Google Chrome users in India. 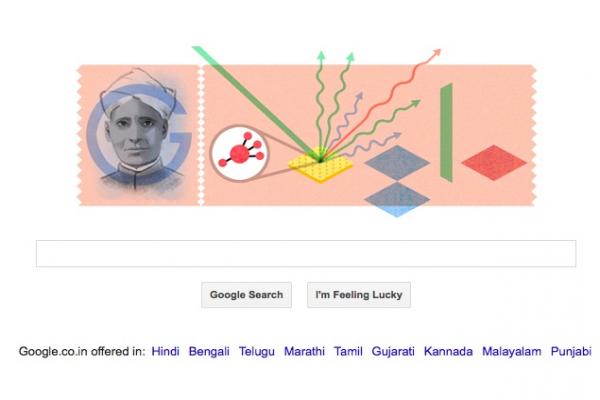