That is a pretty strange welcoming statement for any helpline. But then this is not any helpline. This is the first helpline set up to help women go online. One that starts at the very basics, asking if you know how to switch on a computer.
For the first time anywhere in the world, Google has started an initiative to get more women online. There is a strong reason for starting the project from India. Of the 200 million internet users in what is poised to become the second largest Internet market in the world, just about 30 per cent are woman. The Help Women Go Online initiative being pushed by Google hopes to correct this gender imbalance by getting 50 million women online in the next 12 months.
Yonca Brunini, who leads Tech for Good for Google, accepts that it is a tough challenge given the culture. "They don't see a reason to go online and they don't have access. But it is an audacious , yet worthy goal," she said at the launch event in India. There will have to be content that is local gives women a reason to go online, and there will have to be more affordable devices like smartphone that let them do so, she added.
"We have no commercial goal in doing this. This is not a problem specific to India, but the scale of it here is large," she said, adding that the project will for sure improve the economic status of those who are impacted. But Debjani Ghosh, managing director of Intel South Asia, puts things in perspective by quoting a recent Ernst Young study that puts women as the second largest market after emerging countries.
Google has already tested the project in Rajasthan's Bhilwara town where it exposed 1,00,000 women to the Internet for the first time. "The project ran for three months and covered the town as well as 50 villages around it," explains Sandeep Menon, Google's country marketing manager. It was a learning experience for Google too. "When I explained to them the concept of e-commerce, they wanted to know if they could order fodder sitting at home using their newly found tool," adds Neha, a young local trainer for the pilot project.
Menon says the problem is three-pronged. "There is a lack of knowledge, awareness and access. That is what we are trying to tackle at different levels," he says. Google has roped in Intel, Hindustan Unilever and Axis Bank as partners and all are chipping in with different types of help to achieve the 50 million goal.
While mobile will be the primary access point for most first time female users, Google is also exploring the feasibility of using its own devices to give access. "Women don't want to go to cyber cafes as they are not considered to be safe," explains Menon.
"Now there is no compelling reason for them to go online," explains Rajan Anandan, Vice President & Managing Director, Google India. That could come in the form of local content relevant to them, as well as success stories of people who have made it big thanks to the Internet. For first time users, Google has already set up a website, hwgo.com, to help with the basics.
National Innovation Council chairman Sam Pitroda says this inclusion of women in the digital revolution is imperative. "They have a lot of answers to our problems. We need them to make the online conversations more relevant." 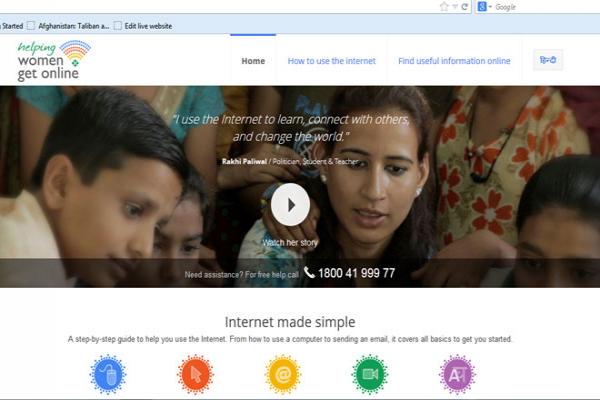