A comet that spent the first 4.5 billion years of its existence in the farthest reaches of the solar system will almost graze the furnace of the sun on Thursday.
Comet ISON’s close approach — and its possible demise, from the sun’s heat and gravitational forces — will give scientists an unprecedented look at the ingredients that came together to form the planets.
If the comet survives — though many experts like Dr. Lisse think it will not — it could provide a bright and striking addition to the night sky in early December as it zooms near Earth on its way back out. The best times for viewing would be right before sunrise or right after sunset. Currently it is not readily visible because it is too close to the sun.
In recent years, astronomers have spotted many sun-grazing comets, but this one is different. Named for the International Scientific Optical Network in Russia, which discovered it in September 2012, it appears to have originated in the Oort Cloud, a sphere of debris about a light-year from the sun. Most of the earlier sun grazers appear to be pieces from a larger comet that looped around the sun many times.
ISON was probably dislodged a few million years ago by the gravitational nudge of a passing star, sending it on a trajectory to the inner solar system for the first time and quite possibly the last.
“And we’re going to watch it bake and boil,” Dr. Lisse said. NASA’s fleet of spacecraft, including the Hubble Space Telescope and the Mars Reconnaissance Orbiter, have been taking pictures as the comet entered the inner solar system. “This particular comet is of extreme interest to us,” said James L. Green, the director of planetary science at NASA.
Few comets are discovered so far out, and some scientists at first thought ISON was several miles in diameter and would become the “Comet of the Century,” rivaling the brightness of a full moon.
But as the comet passed Mars, the NASA orbiter took pictures showing that it was three-quarters of a mile wide at most, smaller than most comets.
Because ISON was discovered so far away, astronomers had plenty of time to plan their observations. Measurements by NASA’s Spitzer Space Telescope, which takes infrared photographs, showed a large envelope of carbon dioxide around the nucleus. “It is looking like carbon dioxide may be a very fundamental molecule in that early solar system rather than carbon monoxide,” Dr. Lisse said.
As ISON approaches the sun, the motions of its tail reveal the usually invisible movements in the solar wind, the torrent of particles continually ejected by the sun.
In recent days, the comet has behaved erratically, brightening and dimming; that has led to speculation that it has already fallen apart. “We just don’t know if it’s in one piece or not,” said Karl Battams, an astrophysicist at the Naval Research Laboratory.
Even falling apart could be valuable. Dr. Lisse said scientists understood how fine dust particles conglomerated into larger particles the size of BBs and marbles, and they know how comet-size objects can combine into planets. But they have not figured out how the BB- and marble-size objects combine into comets.
“When the BBs and the marbles hit each other, they fall apart,” Dr. Lisse said. By looking at the process in reverse, he went on, scientists can “see how it got put together” in the first place. 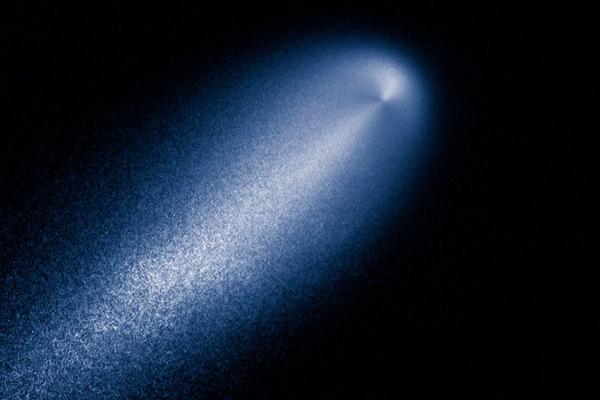